Zobo drink, also known as hibiscus tea, is a popular beverage in Nigeria that is made from dried flowers of the Hibiscus sabdariffa plant, which is also called “roselle” or “red sorrel”.

Widely enjoyed due to its unique refreshing tart flavor, zobo drink comes with a good number of proven nutritional and medical benefits. These benefits can be attributed to the fact that roselle is rich in vitamins A, B2, B2 and C, minerals such as calcium, phosphorus, and iron, organic acids, amino acids, and antioxidants. 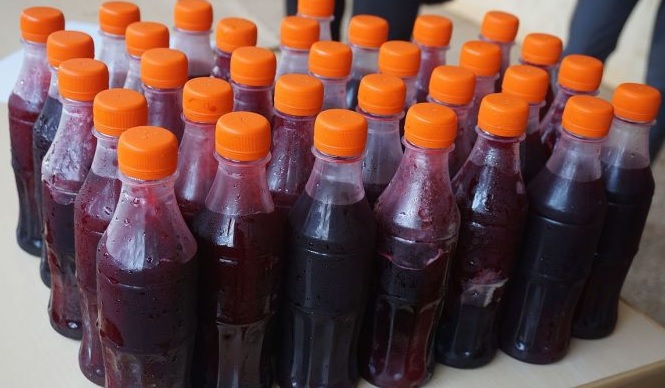 In this article, you will learn more about what zobo drink contains as well as the multiple health benefits you can enjoy by taking this drink. You will also learn some other research-backed details of the links between zobo drink and various health conditions.

For ages, Hibiscus sabdariffa has been used all over the world for different therapeutic and preventive purposes. And interestingly, modern science has proven many of the health benefits of this plant and its tea. Now, let’s look at some of them.

Zobo drink is packed with powerful antioxidants that may help to eliminate free radicals, thereby preventing damage to your body’s cells as well as diseases that can result from such damage. Studies have revealed that the potent antioxidants in zobo drink include anthocyanins, polyphenolic acids, and flavonoids.

Many research studies have revealed that zobo drink may be associated with weight loss as well as protection against obesity. Aside from their antioxidant effects, the anthocyanins, flavonoids, and phenolic compounds present in Hibiscus sabdariffa flowers can help to increase the rate of elimination of fats from your body. They also reduce the size of fat cells in the body, thereby reducing the risk of obesity.

Because it has not been proven that zobo drink suppresses the appetite, you can get better weight loss results by combining zobo drink with a natural appetite suppressant, such as fenugreek.

Some studies have proven that zobo drink may help to lower the amount of fats in the blood. These fats, when allowed to accumulate in your body, increase your risk of heart disease.

In one study, 60 diabetic patients were given black tea or hibiscus tea. After one month, it was found that those who drank hibiscus tea had reduced “bad” cholesterol (LDL) in their blood as well as increased “good” cholesterol (HDL).

Another study conducted on patients with metabolic syndrome also revealed that taking hibiscus extract could lower total body cholesterol while increasing the amount of “good” cholesterol.

Many research studies have been conducted to investigate the effects of hibiscus tea on hypertension. And interestingly, these studies confirmed that zobo drink is as effective as some anti-hypertensive drugs in the treatment of mild to moderate hypertension — with no adverse effects attributed to this treatment.

Note, however, that zobo drink may interfere with the action of hydrochlorothiazide, a diuretic drug used for treating high blood pressure. So, if you’re taking this drug, it is not safe to consume zobo drink.

Your liver plays many roles in your body. These include secreting bile, producing proteins, breaking down fat, and many others. This makes your liver essential to your overall health. Zobo drink helps to keep your liver healthy and working efficiently.

One study found that taking hibiscus extract for 12 weeks helped to improve liver steatosis in 19 overweight persons. Liver steatosis is a condition in which excess body accumulates in the liver, increasing the likelihood of liver failure.

Other studies have also found that taking hibiscus extract helps to protect the body from the toxic effects of drugs by increasing the production of liver enzymes that help to detoxify drugs by up to 65%.

Studies have revealed that roselle helps to fight infections by bacteria, fungi, and parasites. One test-tube study revealed that hibiscus extract inhibited the growth of E. coli, a type of bacteria that causes diarrhea and other problems in the digestive system. Another study showed that the extract fought eight different types of bacteria, and was as potent as some antibiotics in doing so.

Other studies have also revealed that zobo drink could help fight or prevent fungal diseases by inhibiting the disease-causing toxins produced by some fungi.

So, consuming zobo drink can help you to prevent cancer. It can also reduce the growth rate and invasiveness of already-formed cancers.

So, if you have diabetes mellitus, especially type 2, zobo drink might help to keep your blood sugar at normal levels. Note, however, that zobo drink should not be considered as a substitute for recommended drugs for the treatment of diabetes.

Zobo drink has been proven to have possible anti-ulcer effects. One study revealed Hibiscus sabdariffa significantly reduced the rate of acid production in the stomach of experimental rats while increasing the rate of production of the mucus that protects the stomach wall.

Another study found that Hibiscus sabdariffa seed oil and seed extract had the same effects (as explained above) on ulcerated stomach walls of Sprague dawley rats.

These studies drive home the point that zobo drink might be beneficial to ulcer patients.

Studies have also found that zobo drink can help enhance breastmilk production in breastfeeding mothers by increasing the body levels of prolactin, the hormone that causes milk secretion.

It has been reported that high doses of hibiscus extract could potentially cause liver damage. So, you should avoid taking excessive amounts (several cups) of zobo drink.

It has also been found that zobo drink can interact with hydrochlorothiazide (a diuretic used in treating hypertension) and paracetamol. So, if you’re using either of these drugs, don’t take zobo drink.

Other sources have also found that zobo drink consumption is not safe for people who take chloroquine (an antimalaria medication). This is because zobo drink contains compounds that may reduce the effectiveness of chloroquine in the body.

Note, however, that consuming zobo drink is generally safe as long as it is made from Hibiscus sabdariffa flowers. So, if none of the above caveats apply to you, you can take zobo drink without any worries.

According to a 2019 study, hibiscus tea has been associated with stimulating and regulating menstruation. The drink helps to regulate the hormones that control menstruation and encourages the flow of blood to the uterus to stimulate menstruation. So, ladies or women with irregular periods can benefit from zobo drink consumption.

Health Benefits of Zobo Drink to a Pregnant Woman?

Although zobo drink offers a good number of health benefits, it is not recommended for pregnant women. This is because certain studies conducted on the effects of hibiscus tea on pregnancy pointed to potential risks. Even though these studies were carried out using animals, the findings are enough to discourage the consumption of zobo drink in human pregnancies, too.

Some of the risks pointed out include miscarriage and delayed puberty in the yet-to-be-born child.

Due to the contrasting results on the effects of zobo drink on male fertility, more research would be required to get more accurate results. As such, it is safer to assume that zobo drink does not help to improve male fertility.

As for female infertility, there is no strong evidence that zobo drink affects it in any way. The closest link is the impact of zobo drink on menstruation, which has been explained above.

While zobo drink has been proven to help with weight loss, there is no evidence that this effect can be localized to a certain part of the body. This means zobo drink cannot specifically burn your belly fat. However, since it helps to burn body fat generally, regular consumption might inevitably burn belly fat along with fat in other parts of the body.

We could not find any evidence linking Hibiscus tea with fibroids. As such, we cannot make any claims with regards to how zobo drink affects fibroids.