The Igbo tribe makes up one of the three major ethnic groups in Nigeria. The Igbo people can be mostly found in the South-eastern part of Nigeria where they are involved in trading and crafting.

The Igbo culture is made up of unique customs, traditions, music, and dance, but we are going to concentrate on the foods that are unique to the Igbo people in this article. 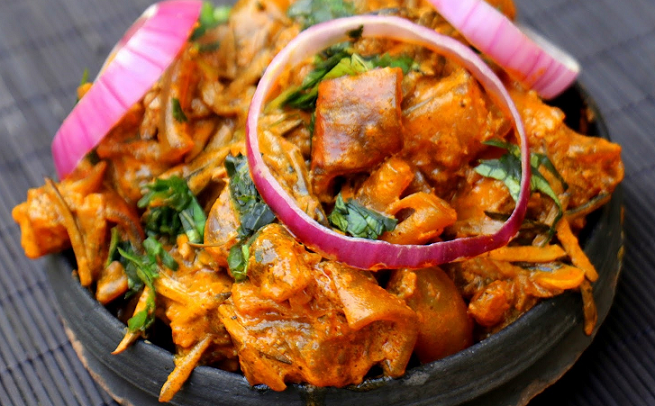 Just like their Yoruba and Hausa counterparts, the Igbo people are known as the masters of the kitchen with several delicacies to their name.

In this post, we are going to look at the popular Igbo foods, their ingredients and health benefits.

Yam is one of the most consumed foods in the Igbo land and they are considered to be the most important crop in the region. Every year, the New Yam Festival is celebrated in honor of a bountiful harvest during the farming season.

With yams, the Igbo people are able to make different delicacies that are not only delicious in taste but nutritious to the body. One of the popular delicacies is Yam with Fish Pepper Soup. The preparation method for this food is very easy.

To prepare Yam with fish pepper soup, you’ll need yams, fish, pepper, onions, seasoning, and spices (usually the number of ingredients you use will depend on how spicy and tasty you want the food to be).

This food is quite peppery, so it shouldn’t be consumed for breakfast. The benefits of consuming this dish are numerous. Yam and fish are known to pack a lot of beneficial nutrients needed for the proper functioning of the body.

Yam is a good source of beneficial nutrients like fibre, vitamin C, manganese, vitamin B6, vitamin A, and potassium.

Fish, on the other hand, supplies more beneficial nutrients to the body. It contains calcium (which is important for building healthy bones), phosphorus, iron, iodine, zinc, magnesium, vitamin D, riboflavin, and potassium.

Jollof rice is not a delicacy that is unique to the Igbo people but to all Nigerian cultures. The preparation method is usually the same for all recipes, however, the use of extra ingredients like meat or fish can completely change the taste of the food.

For most Igbo people, the best meat comes from the bush which is why most of them prefer bush meat to any other kind of meat. Bushmeat could be from any animal such as grass cutter, antelopes, rabbits, and squirrels.

Jollof rice could also be prepared and served with goat meat instead of bushmeat. Whichever one you go for, the taste is always delicious.

The benefits of this meal are also numerous. The rice used in making the dish is a source of many important nutrients such as B vitamins, folic acid, iron, and magnesium.

Meat is also a source of important vitamins and minerals such as protein, vitamin B-12, zinc, vitamin E, potassium, and sodium. All these nutrients are responsible for many biological processes in the body.

Uha soup is one of the foods unique to the Igbo people. Today, the soup is consumed in all parts of Southern Nigeria with several modifications being made to boost the taste and nutritional value of the soup. However, Uha soup still remains indigenous to the Igbo people.

This soup is usually consumed with fufu or pounded yam. Like most Nigerian soups, Uha soup is packed with a lot of benefits. A lot of vegetables are also used in making this soup which makes it nutrient-dense.

This soup offers nutrients such as folic acid, iron, magnesium, vitamin B-12, zinc, vitamin E, potassium, and sodium. The nutrients and health benefits you’ll get from eating this soup will depend on the type and number of ingredients used in making the soup.

The more ingredients that are used in making the soup will translate to more nutrients and more health benefits for you.

Igbo Bitter Leaf Soup or Ofe Onugbu (as it is popularly called by the Igbo people) is named so because the leaves used in making the soup are popularly known as “bitter leaf”. However, these leaves are far from bitter as they are used to make many tasty and nutritious delicacies in Nigeria.

This bitter leaf soup is a vegetable soup and the most popular soup of the Igbo tribe. It has been ranked among the top 10 popular soups in Nigeria by many foodies and food review sites.

Yam pepper soup is a popular soup in the Igbo land that is consumed for its delicious taste and health benefits. It is made with yam, onions, fish or meat, peppersoup spice, and other food seasonings.

Usually, when making this food, a lot of vegetables like uziza leaves and scent leaves are used to boost the nutritional content of the food. The food is quite easy to prepare, however, it should not be taken as breakfast due to its peppery nature.

If you’re a lover of bushmeat, then Nkwobi might be the right delicacy for you. This dish is made of mostly bush meat with other ingredients like utazi leaves, potash, and onions to spice up the taste.

The bushmeat used making Nkwobi could be from any animal. The most popular options are rabbits, squirrels, grass cutters, and antelopes.

This dish is highly nutritious since it is made out of meat which is a great source of many nutrients. The use of extra ingredients in preparing the dish boosts its nutritional value so you should expect to gain a lot of health benefits just by consuming this dish.

These are some of the traditional Igbo foods that are indigenous to the Igbo people. The preparation methods of these foods are usually easy and their nutritional values are mostly high.